How to tackle the top 3 calibration challenges for video stabilization

As a camera engineer or someone with an interest in video stabilization software, you should be aware of challenges in relation to calibration so you can make the product development process smooth and efficient. We have highlighted three of the greatest challenges from our guide “Mastering video stabilization in product development” and share more in-depth insights on why they are important and how to tackle to them.

If the metadata from your gyro sensor do not match the photo taken in reality, then you’ll have a problem. Being off by even just a millisecond can have a significant impact on video stabilization performance and getting everything perfectly in sync is no simple task.

Check that the gyro sensor and image sensor are not moving independently. If one moves while the other is still, then you can’t be sure that the movement reported by the gyro is the same as what the image sensor picked up. This will have a noticeable adverse effect on synchronization with time stamps. Or the error could be on the data end if the metadata collected was slightly inaccurate.

After conducting tests, checking for errors and calibrating, you’ll know you have reached the finish line when the difference between the gyro sensor reading and the time stamps is down to within one tenth of a millisecond.

Rolling shutter artifacts can occur when a camera is in motion because a complete video frame is not recorded in an instant. Instead, the pixels are recorded in a certain order, either vertically or horizontally. When moving, the scene at the beginning may differ from the scene at the end of the shot, causing a skewed and distorted image.

More movement means more rolling shutter, so if your use case involves filming frequently while in motion, and especially fast and sudden movement, then you should pay extra attention to rolling shutter effects. Simulate real-world conditions, such as the frequent vibrations of a drone in poor weather, and test to see whether you need to calibrate to reduce the rolling shutter artifacts.

Now it’s time to test and calibrate your lenses. How much work this will require may depend on the lens quality of the camera module you purchased. By carefully calibrating your lenses, you can compensate for greater deviations if you opted for a cheaper lens system.

There are various types of lens distortions that affect video stabilization and they are likely to differ from lens to lens. They may have different strengths and focal lengths as well. It also makes a difference whether they are wide-angle, regular camera or telephoto lenses. The exact specifications for each lens will differ even if they were ordered together with the same standard specifications.

If you opted for a relatively cheaper camera module with a larger standard deviation in lens quality, you should strongly consider calibrating each of your devices individually. Otherwise, you could risk unforeseen adverse effects on video stabilization in some products. Carefully calibrate the focal length and radial distortions for each device to be on the safe side.

Now that you know what challenges to look out for and have an idea of how to tackle them, you need the right tools.

We’ve poured our in-depth calibration knowledge and experience from numerous video stabilization projects into our software development kit – Vidhance SDK. Don’t hesitate to get in touch with our video quality experts to learn more about how to master calibration with our SDK. For inspiration, insights and best practices for the next generation of video enhancement, enter your email address below and subscribe to our newsletter. 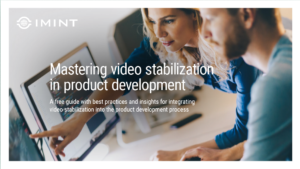 Video stabilization best practices and insights every step of the way.