Enhancing the video quality and improving the DXOMARK score while not increasing cropping nor power consumption. How? In this blog post, you’ll learn about the secrets behind the new Vidhance Horizon Correction feature. 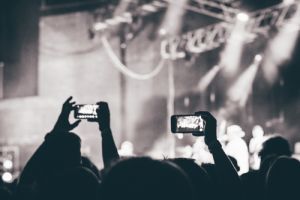 A common sight at a Metallica concert or your children’s school play is the forest of smartphones in the air, while dazzled fans and proud parents are trying to capture every unique move on stage. Keeping the phone perfectly aligned horizontally is just not possible.

Or maybe you want to pan the view from the London eye? Or capture a horse jumping record-high obstacles and only have one hand available for holding the camera? If you would wait for the perfect conditions before launching the video recorder on your smartphone, a lot of memorable moments would remain uncaptured.

In control when filming with drones and action cameras

Anyone who has ever tried to fly a drone knows that the steering isn’t always that smooth. And the power of a helicopter view of a magnificent landscape is somewhat reduced with an undue skewed horizon, especially together with the slight touch of nausea that the wobbling may induce.

The same goes for when heading downwards wearing an action camera, regardless of whether you are skiing, biking, or perhaps even jumping out of a plane or off a ridiculously high building in Vegas. You’ll have other things to worry about than controlling the angle of the horizontal line.

No extra cropping for horizon correction

For still images, correcting a skewed horizon after capture is quite straightforward. To do the same for a video – in real time – is much more challenging.

Normally, compensating for a skewed horizon means cropping a lot of the image. Moreover, if you apply several features in sequence, the resulting image could end up way smaller than the original field of view.

However, since Vidhance Horizontal Correction is performed in parallel with the other stabilization processing and quality-improving algorithms of the Vidhance platform, no extra cropping is needed outside of the standardized processing.

So how is this powerful, fast, and – in a computational way – cheap feature even possible? Well, one of the secrets to our efficient horizon correction feature is to apply the algorithms based on sensor data instead of based on image calculations. The use of sensor data means using less computational power and thus less battery.

The sensor data approach is also more reliable since sometimes the horizon is difficult for the algorithms to detect in the image, although the tilt may still be annoying to the human eye.

Real-time processing even in preview

The parallel and real-time processing of all the Vidhance features also means that you achieve a “what-you-see-is-what-you-get” result. Is there anything more annoying than setting up your field of view perfectly before the capture and then ending up with a heavily cropped video because of all the applied corrections?

Having the result visible already in preview mode makes the outcome more predictable. While capturing the video the processing is of course also applied in real-time, there is no latency and no time-consuming post-processing.

Customization and ease-in along an S-curve

Power to the user via the GUI

Vidhance SDK for Horizon Correction comes with basic GUI and visualization features to allow for powerful user experience. The GUI provides the user with feedback on the current tilt and whether the camera rotation is beyond the predefined limit of skewed horizon correction.

Let’s admit it, we all want to reach as high on the DXOMARK score as possible.

Correcting skewed horizons and then have a smooth ease-in when the rotation is intentional is obviously something that improves the video quality – both subjectively and objectively.  Moreover, adding the Horizon Correction feature to your existing Vidhance platform does not deteriorate either the cropping level or the power consumption.