Imint’s video stabilization technology in consumer wearable camera glasses compensates for the user’s unintended motion by keeping the camera image steady and in frame for exceptional on-the-go photography and videography.

Optimized and customized for the specific requirements of consumer wearables like AR glasses, Imint’s Vidhance video stabilization technology overcomes the inherent challenges of keeping AR glasses steady when shooting live video or still photos. The result is a video feed or still images that are in focus and in frame – no matter how much shake or wobble occurs while the wearer is moving during recording.

Combined, these advanced technologies enable end-users to continue to move naturally and maintain active lifestyles as they shoot video and photography hands-free with exceptional results. Thanks to the integration of Vidhance video stabilization software, users of SUPERHEXA Vision AR glasses are free to capture daily moments on a whim and recall clear, accurate images for their enjoyment later.

“Unlike smartphones that can be placed on a tripod for stability, wearables like SUPERHEXA Vision AR glasses move as the body moves, making it much more difficult for video and image feeds to stay in focus,” stated Imint CTO Johan Svensson. “This makes video stabilization not just an attractive selling feature but absolutely essential for mass adoption of wearables in general. Superhexa represents an emerging leading in the growing market of consumer wearables, and we look forward to continued collaboration to ensure that their AR glasses perform their very best.”

With the global wearable market expected to reach $118.16 billion by 2028, according to ResearchAndMarkets, Imint’s Vidhance video stabilization platform is increasingly in demand by leading AR glasses manufacturers like Superhexa, in addition to RealWear, amongst others.

“Imint’s Vidhance video stabilization software helps differentiate the SUPERHEXA Vision AR glasses from others in the marketplace – delivering a seamless, engaging, ‘what you see is what you get’ experience for consumers,” says Xia Yongfeng, Founder, Chairman and CEO of SUPERHEXA. “Enabling consumers to shoot fully-stable video and still images effortlessly and accurately from a wearable device like our SUPERHEXA Vision AR glasses elevates Superhexa as a pioneer in the market and creates a new, exciting application for users to explore.”

The Vidhance video stabilization software complements a host of other core technologies critical to the performance of the SUPERHEXA Vision AR glasses, including Qualcomm Snapdragon chipset, Sony Micro OLED screen, and a built-in 990mAh high-density battery which provides 3.3 hours of power, and 100 minutes of video recording time, when fully charged.

Furthermore, an LED shooting indicator attached to the main camera body lights up immediately when the eyewear is activated to take photos or record videos. Photos and recordings can be transmitted via Bluetooth and Wi-Fi from the glasses to the user’s smartphone for storage or sharing with friends and family. A variety of augmented reality functions are built into the AR glasses, as well.

For more information about Imint and its video stabilization technology, visit www.weareimint.com. For the press kit, click here.

Established in October, 2020, Superhexa (Beijing Superhexa Century Technology CO. Ltd) is an innovative hardware company that specializes in the production of personal consumer electronics. “Be your hero” is our slogan, and we strive to explore the relationship between futuristic technology and mankind to make technology more natural in everyday life. Headquartered in Beijing, the company employs a core team of talented experts with rich experience in hardware & software, mobile technology, software algorithms, physical design, the supply chain, and marketing. Many of these experts come from well-known companies like Microsoft, Alibaba, Xiaomi, and Huawei. After Xiaomi Technology and Shunwei Capital invested in Superhexa, we became part of the Xiaomi ecosystem in April 2021.

The case for reimagining video stabilization to empower the metaverse - Guide 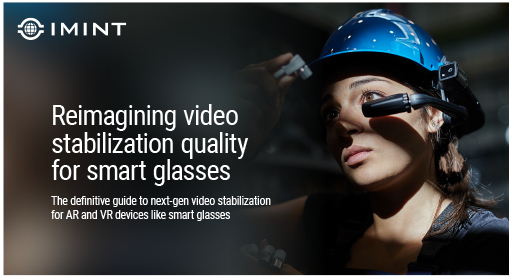 Insights on the reimagining video stabilization for smart glasses